Banana Pudding has always been a staple at southern gatherings, and so I grew up seeing it served on holiday dessert tables. I have to… 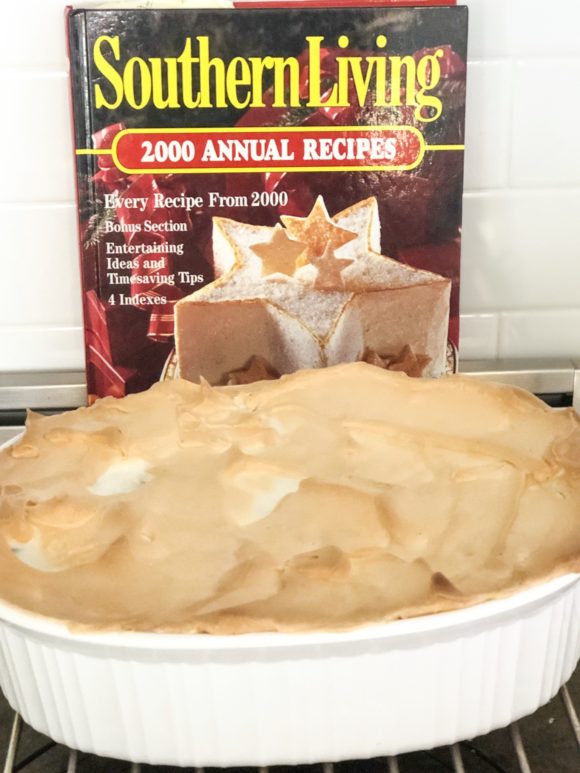 Banana Pudding has always been a staple at southern gatherings, and so I grew up seeing it served on holiday dessert tables. I have to admit, as a child, I was never a big banana pudding fan. And then, I discovered the old-fashioned way of making pudding from scratch, thanks to Southern Living magazine. I have been using this recipe from the Southern Living Annual Recipes Cookbook for the year 2000 (page 334) for 20 years now. I tried to find it online to link to it, but this Southern Living Banana Pudding recipe is as close as I could find. I only make the one written below.

This recipe is basically homemade vanilla pudding with layers of bananas and Nilla wafer cookies- and then topped with a fluffy meringue. It is a recipe with simple ingredients that combine to create a rich and flavorful dessert that keeps everyone going back for seconds (and asking for the recipe!).

Banana Pudding has become a tradition for our family on New Year’s Day. It is a perfect ending to a southern -style meal that we look forward to each January 1st. Luckily, this dessert works for any time of the year, and so keep it handy by Pinning it! It’s a delicious indulgence, and I hope you enjoy every bite!

To make this homemade, homestyle, old-fashioned, made-from-scratch banana pudding recipe, you will only need 9 ingredients. Follow along below for step by step instructions… How to Make Banana Pudding

How to Assemble Banana Pudding

Here is a quick video I made on IGTV

I am grateful for my southern roots and for having Southern Living as a guide to so many delicious recipes. If you prefer a boxed pudding version, you can substitute boxed vanilla pudding for the homemade vanilla pudding- but I really think the homemade pudding is what makes this recipe shine!

For more banana-inspired posts, visit these fun ideas from The Party Wagon…

Curious George at the Drive-In Party

Thanks for being here! Celebrate the end of school or the beginning of summer with this easy and FUN idea!  Make a L-O-N-G banana split for everyone to enjoy and watch the excitement grow as the anticipation of eating “the world’s longest banana split” (okay, not really) begins to sink in! Are you guys ever wowed by all of the creativity that is out there for us to enjoy? I am in awe every single day…

Other Posts in Recipes